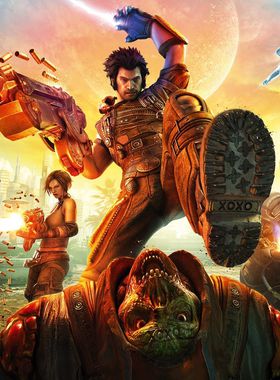 Bulletstorm is a first-person shooter that was much discussed long before its release due to its highly violent game content as well as various swear words. The Entertainment Software Self-Regulation Body (USK) only gave the age rating to a heavily modified version. In contrast to the original text, this version does without particularly cruel killing acts and bloody scenes. The distant future: As a member of a particular unit, Grason Hunt's job is to track down and eliminate (i.e., kill) criminals and terrorists on behalf of the government. He and his group "Dead Echo" are very well versed in their field of activity. They rarely question their mission objectives, which are given to them by their direct superior General Sarrano. However, when one day during operation, it comes to light that most of their targets were innocent and only unpopular with the government, Hunt, and his men desert and have been making the galaxy unsafe as pirates in a spaceship ever since. One day, however, they come across the ship Sarranos by chance, and Grayson Hunt, partly due to the alcohol fog in which he has been increasingly frequent since the desertion, is carried away to an insane act: In a merciless tantrum, he rams the other ship and both spaceships crash over a foreign planet. Only a few survive the crash, except Hunt only his comrade Ishi. Both men now set out in search of Sarranos ship, both to take revenge and to find a way out of this inhospitable planet. And inhospitable it is in several respects: Not only are flora and fauna quite hostile, but on the earth, there are also various gangs of psychopathic outlaws who want to kill everything they encounter.

Where can I buy a Bulletstorm Key?

With GameGator, you are able to compare 2 deals across verified and trusted stores to find the cheapest Bulletstorm Key for a fair price. All stores currently listed have to undergo very specific testing to ensure that customer support, game deliveries, and the game keys themselves are of the highest quality. To sweeten the deal, we offer you specific discount codes, which you will not be able to find anywhere else. This allows us to beat all competitor prices and provide you with the cheapest, most trustworthy deals. If the current cheapest price of $7.85 for Bulletstorm is too high, create a price alert and we will alert you through email, SMS, or discord the moment the Bulletstorm price matches your budget.

Can I play Bulletstorm immediately after the purchase?

What store should I choose for the best Bulletstorm Deal?