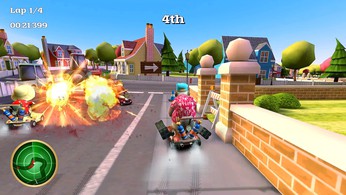 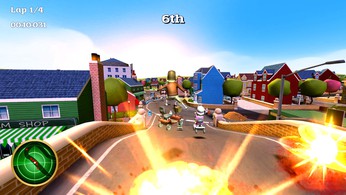 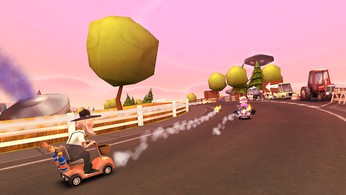 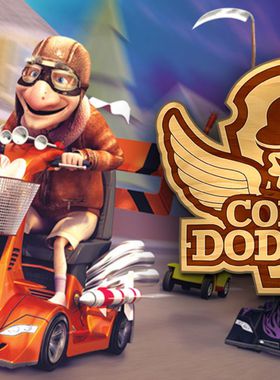 Coffin Dodgers sees you take on the role of saving one of seven quirky retirement village residents, each racing for their soul in "pimped up" mobility scooters against none other than the Grim Reaper himself. Our old heroes are armed with a variety of homemade weapons and gadgets to take on anything the Grim Reaper and his Zombie army may throw at them. Can you survive the retirement village?

Players must battle it out against The Grim Reaper and other competitors over a 13 race Championship, where only the most skilled racer will survive. There are 4 distinct areas within the Sunny Pines Retirement Community, each featuring its own mini tournament in which your rank against other competitors will ensure you progress to the next stage; however finish bottom of the pile and the Reaper gets to take your soul. The final race takes place over each of the 4 areas in a straight shoot out between you and the Grim Reaper.

As the game progresses the game environment becomes more and more apocalyptic as Grims shadow slowly engulfs Sunny Pines. Look out for Grims retinue of fiendish friends as they try and halt your progress.

Where can I buy a Coffin Dodgers Key?

With GameGator, you are able to compare 15 deals across verified and trusted stores to find the cheapest Coffin Dodgers Key for a fair price. All stores currently listed have to undergo very specific testing to ensure that customer support, game deliveries, and the game keys themselves are of the highest quality. To sweeten the deal, we offer you specific discount codes, which you will not be able to find anywhere else. This allows us to beat all competitor prices and provide you with the cheapest, most trustworthy deals. If the current cheapest price of $3.29 for Coffin Dodgers is too high, create a price alert and we will alert you through email, SMS, or discord the moment the Coffin Dodgers price matches your budget.

Can I play Coffin Dodgers immediately after the purchase?

What store should I choose for the best Coffin Dodgers Deal?