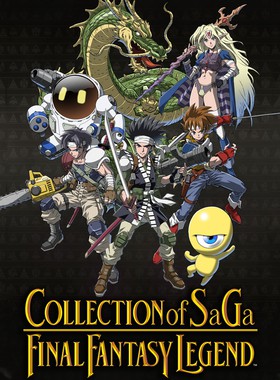 THE FINAL FANTASY LEGEND: The memorable first instalment of the SaGa series, which sold over a million units. Choose from the human, mutant or monster classes for the protagonist, and enjoy the special progression system which comes with each class - including the notable monster progression system, which was ground-breaking at the time. With an eye fixed firmly on Paradise at the top of the tower, the protagonist fights strong enemies awaiting them in a diverse world, as they continue their journey towards the top of the tower.

FINAL FANTASY LEGEND II: The second instalment of the series, which gained popularity through its refined gameplay system and journey through a diverse world. Experience the refined and improved gameplay with a new class, Robot, and appearances from guest characters. The adventure unfolds surrounding the relics of the gods – MAGI.

FINAL FANTASY LEGEND III: A unique story which travels across time and features the first levelling system in the series. Featuring six classes to choose from, as well as the ability to transform into different classes. An adventure which spans the past, present and future unfolds with Talon, a fighter aircraft which can dash through time. Switch to Japanese and play SaGa, SaGa 2 and SaGa 3, the versions of the games released outside of Japan.

Where can I buy a COLLECTION of SaGa FINAL FANTASY LEGEND Key?

With GameGator, you are able to compare 2 deals across verified and trusted stores to find the cheapest COLLECTION of SaGa FINAL FANTASY LEGEND Key for a fair price. All stores currently listed have to undergo very specific testing to ensure that customer support, game deliveries, and the game keys themselves are of the highest quality. To sweeten the deal, we offer you specific discount codes, which you will not be able to find anywhere else. This allows us to beat all competitor prices and provide you with the cheapest, most trustworthy deals. If the current cheapest price of $19.99 for COLLECTION of SaGa FINAL FANTASY LEGEND is too high, create a price alert and we will alert you through email, SMS, or discord the moment the COLLECTION of SaGa FINAL FANTASY LEGEND price matches your budget.

Can I play COLLECTION of SaGa FINAL FANTASY LEGEND immediately after the purchase?

What store should I choose for the best COLLECTION of SaGa FINAL FANTASY LEGEND Deal?