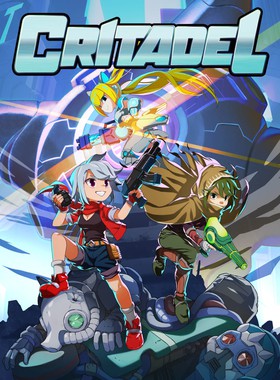 Run, jump and blast through the convoluted pathways and secret chambers of the giant mechanical tower known as Babel. Along the way, you'll face legions of futuristic enemies—minions of the "Order of Noah," an evil faction that has seized control of the tower. At the top: ancient knowledge that can grant eternal life. Who will get there first?

A hardcore action game with GBA-inspired graphics and a pulse-pounding techno soundtrack, Critadel offers a virtually limitless variety of weapon and item configuration options. With upgradeable playable characters and continuously reconfigured branching paths, it's a game that's different every time you play it!

Where can I buy a Critadel Key?

With GameGator, you are able to compare 4 deals across verified and trusted stores to find the cheapest Critadel Key for a fair price. All stores currently listed have to undergo very specific testing to ensure that customer support, game deliveries, and the game keys themselves are of the highest quality. To sweeten the deal, we offer you specific discount codes, which you will not be able to find anywhere else. This allows us to beat all competitor prices and provide you with the cheapest, most trustworthy deals. If the current cheapest price of $19.99 for Critadel is too high, create a price alert and we will alert you through email, SMS, or discord the moment the Critadel price matches your budget.

Can I play Critadel immediately after the purchase?

What store should I choose for the best Critadel Deal?