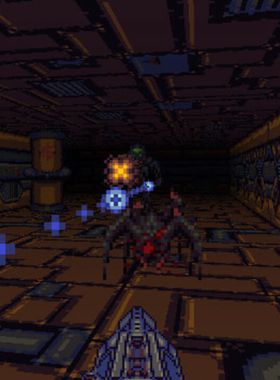 It is the 24th century, and mankind has only recently begun expanding its reach to the star systems nearest our own Solar System.

A dark and terrible secret is buried within a misshapen moon nestled in the massive asteroid belt of the Epsilon Eridani system. Pythos colony was built there ostensibly to exploit the planetoids mineral resources, but now theyve disturbed a kind of evil that lurks beyond the fringes of our comprehension.

Through an ever-changing labyrinth, you will remold yourself into a cybernetic killing machine using the powerful technologies of a long-dead alien civilization. With these new-found weapons, you will pave a path of aberrant corpses toward the greatest threat to mankind ever encountered.

CTHON is an old school science-fiction first-person shooter, where you become a cybernetic weapon against the dark legions of a powerful evil entity - known only as Cthon - who lurks within the planetoid. It is a classic space horror game, inspired by the likes of Doom, System Shock, and Quake.

The game is 100% Lets Play, stream, and screenshot friendly.

Where can I buy a Cthon Key?

With GameGator, you are able to compare 4 deals across verified and trusted stores to find the cheapest Cthon Key for a fair price. All stores currently listed have to undergo very specific testing to ensure that customer support, game deliveries, and the game keys themselves are of the highest quality. To sweeten the deal, we offer you specific discount codes, which you will not be able to find anywhere else. This allows us to beat all competitor prices and provide you with the cheapest, most trustworthy deals. If the current cheapest price of $0.96 for Cthon is too high, create a price alert and we will alert you through email, SMS, or discord the moment the Cthon price matches your budget.

Can I play Cthon immediately after the purchase?

What store should I choose for the best Cthon Deal?