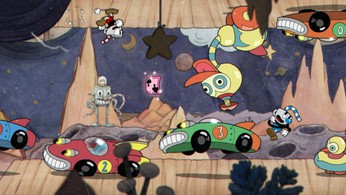 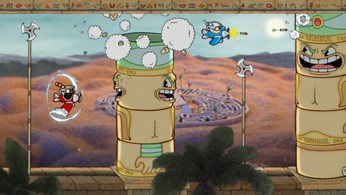 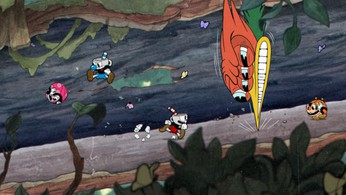 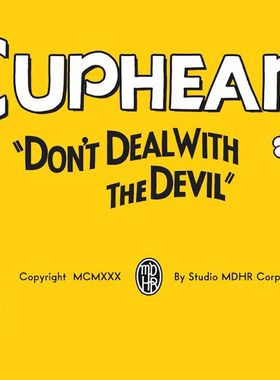 Cuphead offers classic shooter action focused on boss battles. Inspired by the cartoons of the 1930s, graphics and sound were created using techniques from that era, like hand-drawn animations, watercolour backgrounds, and original jazz recordings. Play as Cuphead or Mugman and cross fantastic worlds, acquire new weapons, learn powerful super moves and uncover hidden secrets as you try to pay off your debt to the devil.

Cuphead tells the story of two mugs - Cuphead and Mugman - who are blinded by dreams of success in a casino and make a very bad deal with the devil: To repay their debts, they have to bring him the souls of all his debtors. How do Cuphead and Mugman achieve this? By challenging them to a fight, and in the best case, by defeating them. The trick to mastering Cuphead is surprisingly simple. Strictly speaking, every fight works the same way: you start the level, dive headfirst into the first duel, dodge attacks as much as possible and try to memorize the patterns of the respective boss - until you've inflicted enough damage for the fight to move to the next phase. Cuphead is pure arcade action, where you shoot your opponent until he finally surrenders to his fate. Blunt memorizing, however, will not help you. The times at which a boss unpacks his attacks are randomly decided.

Depending on the equipment and weapon you choose, the way you approach battles changes. Cuphead and Mugman can not only shoot into eight possible directions, but also use a secondary weapon. When you carry pink projectiles, charging a special bar at the same time, allows you to fire devastating super attacks. By switching between the two weapon slots, battles gain enormously in dynamics, as you constantly move back and forth in order to dodge and find the best position for your shot.

Cuphead is a wonderful gem in the arcade platformer genre and a must for anyone who likes boss battles. The fantastic style is so well done, that pictures and videos speak for themselves, while the jazzy soundtrack helps create the right cartoon atmosphere.

Where can I buy a Cuphead Key?

With GameGator, you are able to compare 25 deals across verified and trusted stores to find the cheapest Cuphead Key for a fair price. All stores currently listed have to undergo very specific testing to ensure that customer support, game deliveries, and the game keys themselves are of the highest quality. To sweeten the deal, we offer you specific discount codes, which you will not be able to find anywhere else. This allows us to beat all competitor prices and provide you with the cheapest, most trustworthy deals. If the current cheapest price of $17.61 for Cuphead is too high, create a price alert and we will alert you through email, SMS, or discord the moment the Cuphead price matches your budget.

Can I play Cuphead immediately after the purchase?

What store should I choose for the best Cuphead Deal?