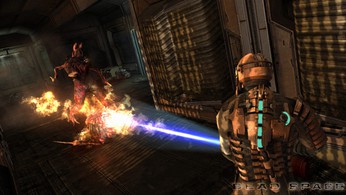 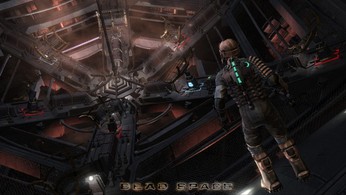 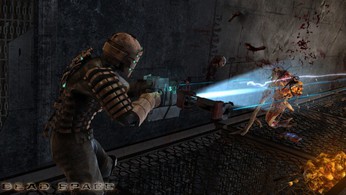 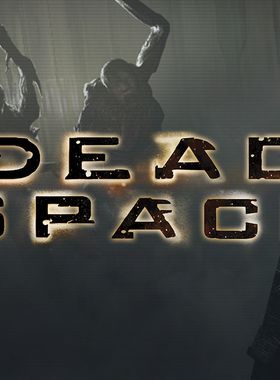 The USG Ishimura is a spaceship that mines raw materials on a large scale. One day, however, radio communication with the giant suddenly breaks down. A small spacecraft with engineer Isaac Clarke on board is sent to deal with the problem; after all, it is thought to be due to technical difficulties. Once onboard the Ishimura, however, it quickly becomes apparent that technical issues are the least of the problems one has to deal with: the entire crew of the giant spaceship is dead, brutally slaughtered, and traces of the massacre are found all over the ship. But that's not all: the dead bodies of the humans are infested by the Necromorphs, an alien species that use the dead as hosts and reassembles them into grotesque new forms, hunting down possible survivors. In the role of Isaac Clarke, it is now the player's task to survive the madness on the Ishimura, find his fiancée who was on board the ship, and, if possible, escape with her. "Dead Space" is an incredibly well-staged horror adventure. A more oppressive atmosphere than here can hardly be found in any other game, including "Resident Evil 5". Also, such a high degree of violence is rarely represented in any other game. However, in "Dead Space" the player does not fight against humans, but against brutal creatures, which once were humans, but now have nothing in common with them. Therefore the depiction of violence is just about acceptable, even if it can be alarming in some moments. However, it fits so perfectly into the gloomy mood of the game and contributes significantly to the gaming experience.

Where can I buy a Dead Space Key?

With GameGator, you are able to compare 18 deals across verified and trusted stores to find the cheapest Dead Space Key for a fair price. All stores currently listed have to undergo very specific testing to ensure that customer support, game deliveries, and the game keys themselves are of the highest quality. To sweeten the deal, we offer you specific discount codes, which you will not be able to find anywhere else. This allows us to beat all competitor prices and provide you with the cheapest, most trustworthy deals. If the current cheapest price of $2.67 for Dead Space is too high, create a price alert and we will alert you through email, SMS, or discord the moment the Dead Space price matches your budget.

Can I play Dead Space immediately after the purchase?

What store should I choose for the best Dead Space Deal?