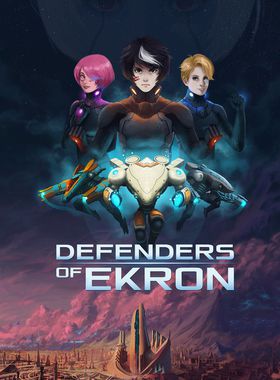 About Defenders of Ekron

Defenders of Ekron in an Adventure/Shmup game that mixes the classic action of a Shmup and the exploration of an Adventure game, including dungeons and a sci-fi experience. You take the role of Eneas, a young and bold cadet that has trained his entire life to pilot his Anakim, an advanced mech capable of absorbing and transforming the energy around it into a special ability, but something goes wrong and Eneas is forced to join an experimental program to face the Renegades, a group of rogue Anakim pilots, that threaten to destroy the nation by leading a civil war. With features like 360° shooting range, unique scenarios to discover, exploration modes to analyze the environment, a powerful shield, and different upgradable Combat modes, you must defend the Technocratic Republic of Ekron, but be careful, for dark secrets await and the limits between right and wrong will slowly fade. Listen to your instinct, because revolution starts within.

Where can I buy a Defenders of Ekron Key?

With GameGator, you are able to compare deals across verified and trusted stores to find the cheapest Defenders of Ekron Key for a fair price. All stores currently listed have to undergo very specific testing to ensure that customer support, game deliveries, and the game keys themselves are of the highest quality. To sweeten the deal, we offer you specific discount codes, which you will not be able to find anywhere else. This allows us to beat all competitor prices and provide you with the cheapest, most trustworthy deals. If the current cheapest price for Defenders of Ekron is too high, create a price alert and we will alert you through email, SMS, or discord the moment the Defenders of Ekron price matches your budget.

Can I play Defenders of Ekron immediately after the purchase?

What store should I choose for the best Defenders of Ekron Deal?