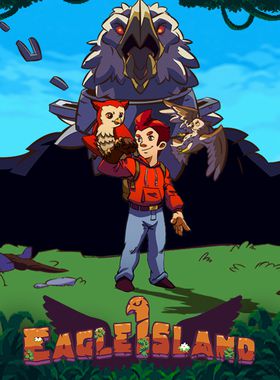 Discover the avian world of Eagle Island with Quill and his loyal owl companion, Koji. Explore lush forests, treacherous caverns, and uncover the ruins of long lost civilizations on your way to confront the Guardian Eagle, Armaura, in a desperate attempt to rescue Ichiro from her clutches.

With its falconry-inspired gameplay & uniquely generated worlds, Eagle Island is set to a beautifully modernized pixel art aesthetic and provides a breath of fresh air to roguelite platformers.

Taking inspiration from roguelites, Eagle Island can be enjoyed in a variety of ways — from short, focused speed runs to a sprawling, narrative-driven adventure. Uncover the mystery of the Island of Yulu while earning permanent upgrades for Quill & Koji! Rogue Mode - test your skills in a series of 16 unlockable challenge maps - permadeath awaits!

Quill's arsenal of moves consists of running, jumping, and a cliff-hanging ledge grab - keeping to it's classic 16-bit inspirations. To survive, you'll need to defeat & subdue threats with the help of your owl companion Koji! Cast Koji & launch attacks in 8 cardinal directions — dispatching enemies in quick succession for chain combos earns greater rewards. Miss an attack and Quill is left vulnerable while waiting for Koji to return. If Koji is injured or incapacitated, Quill will be briefly defenseless and must take evasive action until his owl friend recovers!

Where can I buy a Eagle Island Key?

With GameGator, you are able to compare 7 deals across verified and trusted stores to find the cheapest Eagle Island Key for a fair price. All stores currently listed have to undergo very specific testing to ensure that customer support, game deliveries, and the game keys themselves are of the highest quality. To sweeten the deal, we offer you specific discount codes, which you will not be able to find anywhere else. This allows us to beat all competitor prices and provide you with the cheapest, most trustworthy deals. If the current cheapest price of $0.83 for Eagle Island is too high, create a price alert and we will alert you through email, SMS, or discord the moment the Eagle Island price matches your budget.

Can I play Eagle Island immediately after the purchase?

What store should I choose for the best Eagle Island Deal?