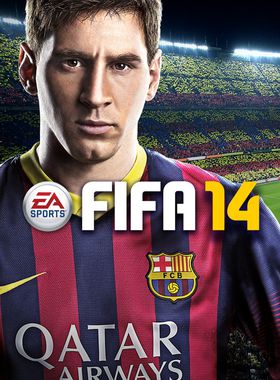 Fueled by EA SPORTS IGNITE, FIFA 14 will feel alive with players who think, move, and behave like world-class soccer players, and dynamic stadiums that come to life. Players have four times the decision making ability and feel alive with human-like reactions, anticipation, and instincts. With 10 times more animation depth and detail than previous consoles, FIFA 14 delivers the dynamic movements and biomechanics of the worlds best soccer players. Players are agile and athletic as they plant, pivot and cut, and explode out of each step. The increased fidelity has a game-changing effect on gameplay. Plus, the artistry and athleticism of soccer will come to life with the addition of hundreds of new types of skills and hundreds of new behaviors. And for the first time ever, fans will feel the electricity of a living stadium as the emotions of new 3D crowds rise and fall around the stories on the pitch.

With GameGator, you are able to compare 6 deals across verified and trusted stores to find the cheapest FIFA 14 Key for a fair price. All stores currently listed have to undergo very specific testing to ensure that customer support, game deliveries, and the game keys themselves are of the highest quality. To sweeten the deal, we offer you specific discount codes, which you will not be able to find anywhere else. This allows us to beat all competitor prices and provide you with the cheapest, most trustworthy deals. If the current cheapest price of $21.93 for FIFA 14 is too high, create a price alert and we will alert you through email, SMS, or discord the moment the FIFA 14 price matches your budget.

Can I play FIFA 14 immediately after the purchase?

What store should I choose for the best FIFA 14 Deal?