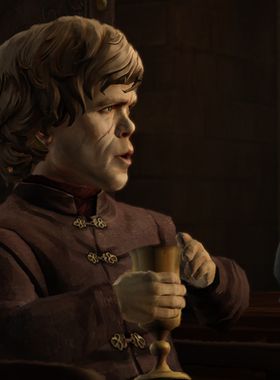 About Game of Thrones - A Telltale Games Series

With the book series "The Song of Ice and Fire" author George R.R. Martin has created one of the most popular entertainment brands in the world today. The dark medieval fantasy epic received a further boost in popularity with the brilliant TV adaptation "Game of Thrones". The Californian game developer Telltale Games has now been given the task of transferring the brand's success to the video games market. This is done in the form of an interactive narrative that focuses on narrative elements and moral choices. The publication will be in episode form. Following the recently released debut episode "Game of Thrones: Iron From Ice", five further events are to be published, each with an interval of a few months. In the interactive series kick-off, players slip into the skin of various members of the Forrester family created by Telltale Games. In times of war, the Forrester family must ensure the survival of their dynasty. Game of Thrones takes place in a fictional medieval setting, in which various royal families fight for the overall domination of the various empires. Fantasy elements - such as dragons or undead creatures - also play a role. In contrast to the fantasy primus "The Lord of the Rings", for example, the often very violent plot does not focus on the classic fight of good against evil. Instead, the grey areas of characters are often illuminated that cannot be assigned to either side. If you like games with a narrative focus and moral choices, the first Game-of-Thrones episode "Iron From Ice" is a recommendable title. However, the software licensing is still too far away from the brilliance and pulling power of the TV series to do full justice to the potential of the original. Also, few situations stick - despite their drama. Moreover, the effects of the decisions made are (still) too small. There is undoubtedly room here to create an even more intense experience in the further episodes. In any case, the game is aimed primarily at fans of the brand who are familiar with the characters and the universe of George R.R. Martin. If this is not the case, you may quickly feel lost.

Where can I buy a Game of Thrones - A Telltale Games Series Key?

With GameGator, you are able to compare 6 deals across verified and trusted stores to find the cheapest Game of Thrones - A Telltale Games Series Key for a fair price. All stores currently listed have to undergo very specific testing to ensure that customer support, game deliveries, and the game keys themselves are of the highest quality. To sweeten the deal, we offer you specific discount codes, which you will not be able to find anywhere else. This allows us to beat all competitor prices and provide you with the cheapest, most trustworthy deals. If the current cheapest price of $38.94 for Game of Thrones - A Telltale Games Series is too high, create a price alert and we will alert you through email, SMS, or discord the moment the Game of Thrones - A Telltale Games Series price matches your budget.

Can I play Game of Thrones - A Telltale Games Series immediately after the purchase?

What store should I choose for the best Game of Thrones - A Telltale Games Series Deal?