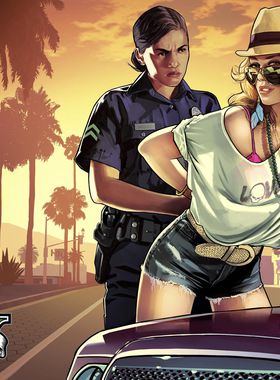 Grand Theft Auto 5 is developed by Rockstar North, the creators of the series, and is the biggest and most ambitious title of the franchise to date. Set in the sprawling city of Los Santos and the surrounding region, the game offers a world of unprecedented scale and detail, brimming with life from the peaks of the mountains to the depths of the ocean.

Los Santos is a sprawling, sun-drenched metropolis filled with self-help gurus, starlets, and forgotten celebrities. Once the envy of the rest of the Western world, the city is now in a time of economic uncertainty and cheap reality TV in the fight against doom. Amidst the chaos, three completely different criminals are forging their own survival and success plans: Franklin, a former street gangster waiting for the right opportunity and the big money; Michael, a seasoned criminal and ex-con whose retirement is far less rosy than what he hoped for; and Trevor, a brutal psychopath driven the search for a cheap drug frenzy and the next big thing. When the crew is left with no other way out, the three companions bet everything on one card in a series of daring and dangerous robberies that could set them up for the rest of their lives.

You can visually adapt the three main characters by going clothes shopping in one of the several clothing stores in Los Santos, but also change hairstyle and beard. From a purely visual standpoint, GTA 5 is miles ahead of any serious open-world game. if you take a closer look at Southern San Andres, you will find something to admire at almost every corner. The designers' attention to detail is reflected in every street in Los Santos and every grain of sand in Blaine County.

Join up to 29 other players in GTA Online and discover races, deathmatches, as well as more unusual tasks, like parachuting and gang fights. You can work together with other players to complete missions, increasing your experience and rank, which in turn unlocks new clothing, weapons, and tuning options. Once you reach rank 12 and are in possession of a luxury apartment, you can start playing the long-awaited heist missions. Heists range from bank robberies to the release of prisoners and must be carried out as a team.

The game is huge, complex, dynamic, varied, and offers a good story with exciting side missions and many allusions to the real world. You are sure to find something to even without playing any side missions: just cruise through the city, take a walk along the beach, go downhill biking, or break into a military base to steal a fighter jet.

Where can I buy a Grand Theft Auto 5 Premium Edition Key?

With GameGator, you are able to compare 5 deals across verified and trusted stores to find the cheapest Grand Theft Auto 5 Key for a fair price. All stores currently listed have to undergo very specific testing to ensure that customer support, game deliveries, and the game keys themselves are of the highest quality. To sweeten the deal, we offer you specific discount codes, which you will not be able to find anywhere else. This allows us to beat all competitor prices and provide you with the cheapest, most trustworthy deals. If the current cheapest price of $13.19 for Grand Theft Auto 5 is too high, create a price alert and we will alert you through email, SMS, or discord the moment the Grand Theft Auto 5 price matches your budget.

Can I play Grand Theft Auto 5 Premium Edition immediately after the purchase?

What store should I choose for the best Grand Theft Auto 5 Premium Edition Deal?