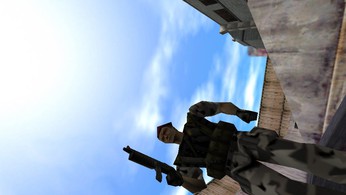 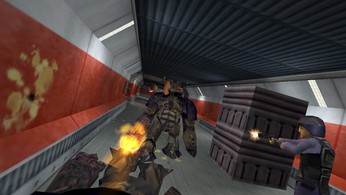 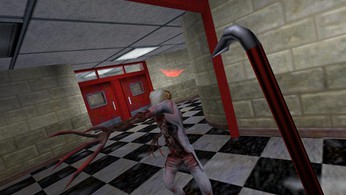 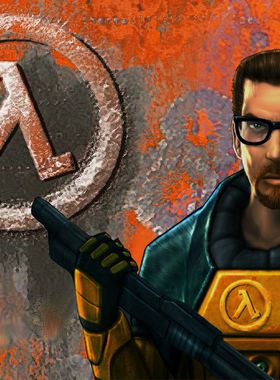 In Half-Life, the player takes on the role of Gordon Freeman, an MIT physicist who is conducting top-secret research at a fictitious rocket test base called Black Mesa in the remote desert of the US state of New Mexico. When an experiment to develop a new energy source using crystals of extraterrestrial origin fails, the research facility is flooded with dimensional gates from a parallel world. Gordon Freeman is confronted not only with hordes of alien creatures from another planet but also with U.S. Marines who have the mission to eliminate anyone who tries to leave the compound. Since the Marines are unable to cope with this situation, the Black Ops Special Forces are sent in behind. ...whose orders are to wipe out all living things in Black Mesa. The game is mainly solved with the help of real, but also fictitious weapons (such as the Gauss rifle). Freeman repeatedly encounters the mysterious G-Man on his way out of Black Mesa, an unknown person who wants to test Freeman and offers him a job at the end of the game.

Valve hired horror author Marc Laidlaw to create the story of the game. The groundbreaking thing was that the development of the story was viewed entirely from the perspective of the player so that no cutscenes interrupted the flow of the game. To this end, many events in the game world were scripted and triggered when the player arrived at a specific location (so-called script sequences).

Although Half-Life was technically based on a typical first-person shooter engine, the game set standards by adding elements from the adventure and jump 'n' run genres. For example, in many situations, the player has to overcome obstacles such as power cables, fans, deep abysses, or toxic wastewater with skill. In other game scenes, for example, movable boxes have to be positioned correctly to reach higher positions or to avoid the triggers of limpet mines. The game also included computer-controlled figures in the role of guards and scientists who were necessary for the player's progress (for example, by opening doors) or helped the player with firepower or medical assistance.

In terms of typical first-person shooter elements, Half-Life was one of the first games to include secondary fire modes on weapons. This provided a more excellent choice of tactics and a smoother flow of combat. For variety, there are also sections of the game where the player controls a rail car or operates fixed weapons such as machine guns and heavy guns.

Where can I buy a Half-Life Key?

With GameGator, you are able to compare 4 deals across verified and trusted stores to find the cheapest Half-Life Key for a fair price. All stores currently listed have to undergo very specific testing to ensure that customer support, game deliveries, and the game keys themselves are of the highest quality. To sweeten the deal, we offer you specific discount codes, which you will not be able to find anywhere else. This allows us to beat all competitor prices and provide you with the cheapest, most trustworthy deals. If the current cheapest price of $7.97 for Half-Life is too high, create a price alert and we will alert you through email, SMS, or discord the moment the Half-Life price matches your budget.

Can I play Half-Life immediately after the purchase?

What store should I choose for the best Half-Life Deal?