Heroes of the Seven Seas 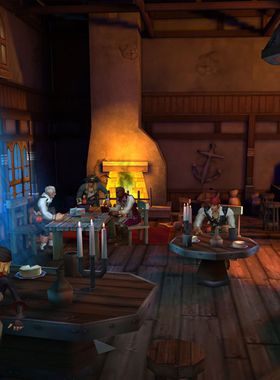 Heroes of the Seven Seas

About Heroes of the Seven Seas

This is about a pirate's adventure in the 16th century. Player will be the pirate to start a stimulating journey with friends to seek after the legendary Seven Sea Artifact on the mysterious sea.

This is FPS RPG game with a combination of land and naval battles.

Through upgrading the ship components, including the ship hull, sail and broadside guns, players can empower their abilities to fight during combats and to defend any attack from the Navy, other pirates or even sea monsters. Players can trade items in the ports or land on any island to explore and gain mystical treasures.

This is a real adventure , a marvel experience in the vast sea and unknown sphere of VR.

Heroes of the Seven Seas is the first game combining the features of naval battles and FPS shooting together.

Players can control the warships' movement while commending attacks against the enemies by using special weapons at the bow, left and right side of the ship and the stern in different angles. When players are boarding with the enemy ships, they can also open fire with the scimitar gun to the enemies who are rushing onto the deck.

Taking the advantage of VR devices, Players are enabled to experience the furious sailing world personally on the scene.

Players are in the well-designed pirate world to enjoy quite a number of interesting and fascinating scenes.

Warship concepts are based on the real ships back in the Sixteenth Century and equipped with a huge upgrade system.

Unique System for Props and Weapons:

There are a lot of weapons for use to correspond to different strategies, such as broadside guns, bombs, mortars and much more magic weapons to try out.

Our revolutionary VR targeting system, using your vision to aim and use different weapons, will bring you to a different VR operating sensibility.

Where can I buy a Heroes of the Seven Seas Key?

With GameGator, you are able to compare deals across verified and trusted stores to find the cheapest Heroes of the Seven Seas Key for a fair price. All stores currently listed have to undergo very specific testing to ensure that customer support, game deliveries, and the game keys themselves are of the highest quality. To sweeten the deal, we offer you specific discount codes, which you will not be able to find anywhere else. This allows us to beat all competitor prices and provide you with the cheapest, most trustworthy deals. If the current cheapest price for Heroes of the Seven Seas is too high, create a price alert and we will alert you through email, SMS, or discord the moment the Heroes of the Seven Seas price matches your budget.

Can I play Heroes of the Seven Seas immediately after the purchase?

What store should I choose for the best Heroes of the Seven Seas Deal?