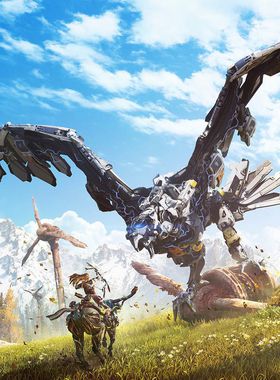 Horizon Zero Dawn is a post-apocalyptic adventure set about 1000 years after the collapse of the human civilisation. The only survivors of an initially unspecified catastrophe have joined together into tribes and live similarly to the people of the Stone Age, surrounded by the ruins of the so-called Ancient. The remaining humans, however live in a wild state dominated by robotic creatures, which are futuristic machine beings modelled after wild animals and dinosaurs in a cyberpunk look. Humans and machines have coexisted for a long time, with the machines being hunted by humans for their components and resources. But the robots are becoming a bigger and bigger threat to the tribes. The main character of the game is Aloy, a young archer and hunter who improves her skills as we progress through the adventure. Exiled from the tribe for the rest of her life because of her unknown origins, she sets out in search of answers. The role-playing elements of the game are defined by a mix of the Assassin’s Creed saga and The Elder Scrolls 5: Skyrim.

Where can I buy a Horizon Zero Dawn Complete Edition Key?

With GameGator, you are able to compare 36 deals across verified and trusted stores to find the cheapest Horizon Zero Dawn Key for a fair price. All stores currently listed have to undergo very specific testing to ensure that customer support, game deliveries, and the game keys themselves are of the highest quality. To sweeten the deal, we offer you specific discount codes, which you will not be able to find anywhere else. This allows us to beat all competitor prices and provide you with the cheapest, most trustworthy deals. If the current cheapest price of $6.66 for Horizon Zero Dawn is too high, create a price alert and we will alert you through email, SMS, or discord the moment the Horizon Zero Dawn price matches your budget.

Can I play Horizon Zero Dawn Complete Edition immediately after the purchase?

What store should I choose for the best Horizon Zero Dawn Complete Edition Deal?