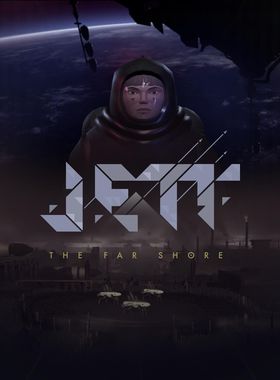 About Jett: The Far Shore

Jett: The Far Shore invites you on an interstellar expedition to carve out a future for a people haunted by oblivion in this cinematic action adventure. As scout Mei, be the first to deploy to a mythic ocean planet, take the helm of a 'jett' and explore a vast unknown - skim low over waves, roar up pristine coastlines and carve through otherworldly woods. Adapt to an intricate, systemic open world and persevere through adversity alongside an intimate ensemble in this heartfelt story of courage, wonder and regret.

Embark on an exploratory single player adventure presented in five captivating acts encompassing monumental moments, laid-back exploration, occasional white-knuckle action, moments of heartfelt companionship, and a helping of existential dread. Soak in a sea of music and 3D sound, with a breathtaking score by Scntfc.

Deploy to the surface of a mythic ocean planet: skim up undiscovered coastlines, inspect indigenous flora and fauna, adapt to new perils, and problem-solve tough obstacles using your jett's array of scientific tools. Investigate the source of 'the hymnwave', an interstellar invitation that propelled a people to look beyond their troubled skies and across the sea of stars, for salvation.

Where can I buy a Jett: The Far Shore Key?

With GameGator, you are able to compare deals across verified and trusted stores to find the cheapest Jett: The Far Shore Key for a fair price. All stores currently listed have to undergo very specific testing to ensure that customer support, game deliveries, and the game keys themselves are of the highest quality. To sweeten the deal, we offer you specific discount codes, which you will not be able to find anywhere else. This allows us to beat all competitor prices and provide you with the cheapest, most trustworthy deals. If the current cheapest price of $29.99 for Jett: The Far Shore is too high, create a price alert and we will alert you through email, SMS, or discord the moment the Jett: The Far Shore price matches your budget.

Can I play Jett: The Far Shore immediately after the purchase?

What store should I choose for the best Jett: The Far Shore Deal?