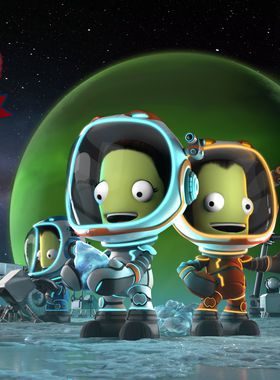 Kerbal Space Program: Breaking Ground Expansion is the second expansion for the PC version of the critically acclaimed space flight simulator, Kerbal Space Program. This feature-rich expansion is focused on increasing the objective possibilities once celestial bodies have been reached by adding more interesting scientific endeavors and expanding the toolset.

After landing on a celestial body, a variety of data collecting equipment can now be deployed to conduct scientific experiments. While gathering that data, newly added surface features have been scattered across the solar system, which players will need to go out in search of to either scan or bring back to Kerbin for further examination.

Additionally, robotic parts are being added! A hinge, piston, rotor, and rotational servo in various sizes will be accessible to massively alter the possibilities of players' crafts. These all operate under realistic physics with real forces and torque, electricity consumption, and even motor mass.

Where can I buy a Kerbal Space Program: Breaking Ground Key?

With GameGator, you are able to compare 3 deals across verified and trusted stores to find the cheapest Kerbal Space Program: Breaking Ground Key for a fair price. All stores currently listed have to undergo very specific testing to ensure that customer support, game deliveries, and the game keys themselves are of the highest quality. To sweeten the deal, we offer you specific discount codes, which you will not be able to find anywhere else. This allows us to beat all competitor prices and provide you with the cheapest, most trustworthy deals. If the current cheapest price of $4.71 for Kerbal Space Program: Breaking Ground is too high, create a price alert and we will alert you through email, SMS, or discord the moment the Kerbal Space Program: Breaking Ground price matches your budget.

Can I play Kerbal Space Program: Breaking Ground immediately after the purchase?

What store should I choose for the best Kerbal Space Program: Breaking Ground Deal?