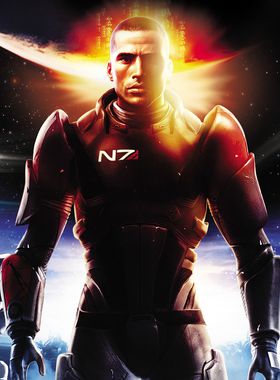 There are two types of role-playing games: one uses a pre-existing world such as Middle-earth from The Lord of the Rings or the Star Wars universe as a background, while other games take a more difficult path. Creating your world with a believable background story and fascinating creatures is costly and complicated. After the Canadian game developers of "Bioware" have impressively brought the Star Wars universe to life on the PC with the Knights of the Old - Republic series, try to create your world with the role-playing game "Mass Effect". The player takes control of the game character Commander Shepard, which can be designed at the beginning. Due to the initially unknown game world, the player is mainly dependent on the information he receives through cutscenes. With a team of two soldiers, he is dropped on a planet surface to investigate the attack on the human settlers living there. It quickly becomes apparent that this is not just a regional conflict but a universe-threatening conspiracy. An unknown people threatens the peacefully co-existing civilizations and wants to destroy them with the help of the traitor Saren. Commander Shepard is thereupon declared a special representative of the Federal Council and sets out to search for the traitor and clues to his intentions. Shepard has six allies at his side, whom he meets during the game, two of whom can accompany him on his dangerous missions. The companions can be controlled indirectly via a command menu and act almost completely independently in battles. In addition to very combat-heavy purposes, multiple-choice type conversations with inhabitants of the foreign planets must be conducted. The player has a direct influence on the behavior of his opponent. So he can try to get information in a friendly way or intimidate his conversation partner. Another typical role-playing element in "Mass Effect" is of great importance: the improvement and equipment of the characters. By solving tasks, the characters gain new abilities. In the course of the game, they can use more special weapons or, for example, acquire telekinesis skills. Commander Shepard can also learn additional conversation skills, which give him special communication skills. Improved equipment can be taken from enemies as missions progress, or found in crates and other containers.

Where can I buy a Mass Effect Legendary Edition Key?

With GameGator, you are able to compare 23 deals across verified and trusted stores to find the cheapest Mass Effect Key for a fair price. All stores currently listed have to undergo very specific testing to ensure that customer support, game deliveries, and the game keys themselves are of the highest quality. To sweeten the deal, we offer you specific discount codes, which you will not be able to find anywhere else. This allows us to beat all competitor prices and provide you with the cheapest, most trustworthy deals. If the current cheapest price of $16.53 for Mass Effect is too high, create a price alert and we will alert you through email, SMS, or discord the moment the Mass Effect price matches your budget.

Can I play Mass Effect Legendary Edition immediately after the purchase?

What store should I choose for the best Mass Effect Legendary Edition Deal?

There are many details that you might want to go through before settling on the deal of your choosing. If you are looking for a special Edition, such as Legendary Edition, you can select these in our menu. When it comes to the actual stores, we made sure that you will never get overcharged/neglected. As we care about your satisfaction, we like to ensure that all deals are legitimate, reliable, and foolproof. On top of that, we make sure all stores affiliated with us have proper refund processes and guarantees and are backed by a competent team to ensure that absolutely nothing will go wrong.