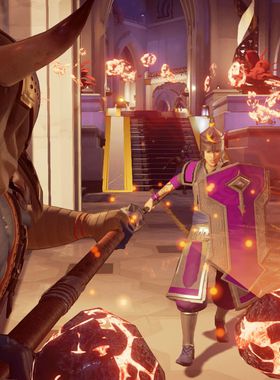 In Mirage, the calm of a strange fantasy world is shattered by ruthless civil war. Warriors armed with steel and magic bring violence and death as they do battle across a fantastical Arabian and Persian-inspired setting of desert sands, market bazaars and grand palaces.

Mirage is a skill-based multiplayer FPS that lets you tear your enemies limb from limb with destructive magic and melee combat. Experiment and find your perfect playstyle between six diverse classes including stealthy assassins, hulking brutes, powerful mages and more. With an unparalleled focus on truly feeling in control of your magic and sword, Mirage demands combat creativity and will challenge you like never before.

From the creators of Chivalry: Medieval Warfare comes a new competitive multiplayer FPS about steel and spells. Exchange-based combat expands from close quarters melee to ranged magic attacks, providing an endless variety of tactical choices, yet instant fun and familiarity for FPS fans.

Mirage captures the true, destructive power of magic and melee combat with the tight control of a first-person shooter. The intuitive combat system demands time and patience to master with skill-based, competitive gameplay that feels like a sword fight from 20 feet away.

Mirage's gameplay crosses the intersection between close quarters and ranged combat. Block any attack – ranged or melee – in bloody combat where you can feel the shock of every blow. Experience the thrill of fantastic battles with an ultra-satisfying, dynamic gore system as limbs fly, blood gushes and heads are dismembered in cathartic, joyful destruction.

Steal ancient magic artifacts and assault opulent palaces in multiplayer modes that carry the immersion of a singleplayer game through an interconnected world of stunning locales.

Player choice is everything. With options for every playstyle, battle in a variety of team-based multiplayer modes and harness six diverse character classes with a selection of combat loadouts.

Express yourself with hundreds of voice commands and explore the unique personalities of a colourful cast of characters.

Find the battlefield of your choice with a new matchmaking system or classic server browser, then make an entrance with customization options to help your warrior stand out.

Where can I buy a Mirage: Arcane Warfare Key?

With GameGator, you are able to compare 6 deals across verified and trusted stores to find the cheapest Mirage: Arcane Warfare Key for a fair price. All stores currently listed have to undergo very specific testing to ensure that customer support, game deliveries, and the game keys themselves are of the highest quality. To sweeten the deal, we offer you specific discount codes, which you will not be able to find anywhere else. This allows us to beat all competitor prices and provide you with the cheapest, most trustworthy deals. If the current cheapest price of $2.94 for Mirage: Arcane Warfare is too high, create a price alert and we will alert you through email, SMS, or discord the moment the Mirage: Arcane Warfare price matches your budget.

Can I play Mirage: Arcane Warfare immediately after the purchase?

What store should I choose for the best Mirage: Arcane Warfare Deal?