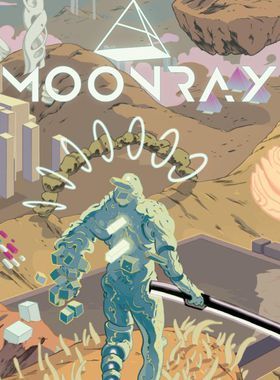 Moonray is a 3rd-person action RPG set in a surreal sci-fi world. Explore a beautiful and deadly landscape on a quest to recover the sacred element and regain control of the planet. Featuring a world-class soundtrack by renowned producer Ten Walls and incredible story by comic artist virtuoso Grim Wilkins, Moonray is a stunning journey with intense combat and an unforgettable style.

Upgrade abilities, weapons and skills to survive the brutal onslaught of the cult. Fight through large, open spaces and tight, intricate corridors in a titanic struggle to recover the sacred element miium. Explore a surreal, sci-fi landscape to unlock all of the hidden mysteries in Moonray.

Moonray is full of stunning, surreal environments. Take the fight to a fierce religious cult in the heart of their holiest shrine complex. Each world features a unique biome with the incredible religious architecture of the cult.

The element miium contains incredible power. The cult has unlocked many of its secrets, allowing it to create incredible holy temples and shrines.

Explore the incredible landscape thoroughly to find the resources needed to upgrade. The enemies will get very tough, very quickly, unlocking new strengths and abilities will be crucial to survival. Beams are spread throughout the enormous levels, allowing fast travel to any unlcoked beam.

Many millennia ago… The Ur-being Iltar unlocked the secrets of the element miium. Mastery of the element gave her god-like powers but it was never enough. Over the centuries she completely conquered the galaxy, looking for every source of miium that she could find.

Channeling the awesome creative force of the element allowed her to mold planets, craft solar systems and create new lifeforms. She dominated the stars and reigned supreme for millennium after millennium.

But in one of the many worlds she had long forgotten about… a civilization stirred. Discovering the incredible possibilities of the element, they came to worship it and remember the creator that had shown them its true potential.

Where can I buy a Moonray Key?

With GameGator, you are able to compare deals across verified and trusted stores to find the cheapest Moonray Key for a fair price. All stores currently listed have to undergo very specific testing to ensure that customer support, game deliveries, and the game keys themselves are of the highest quality. To sweeten the deal, we offer you specific discount codes, which you will not be able to find anywhere else. This allows us to beat all competitor prices and provide you with the cheapest, most trustworthy deals. If the current cheapest price for Moonray is too high, create a price alert and we will alert you through email, SMS, or discord the moment the Moonray price matches your budget.

Can I play Moonray immediately after the purchase?

What store should I choose for the best Moonray Deal?