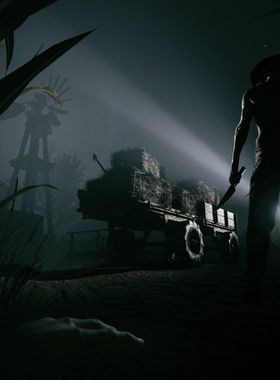 Outlast Trinity: The Ultimate Horror Bundle. Outlast is a first-person survival horror series developed by Red Barrels. The critically acclaimed franchise is now available for the first time on disc as a complete package. The bundle features over 20 hours of terrifying gameplay across Outlast 1, Outlast Whistleblower and the all new Outlast 2. The protagonists of Outlast have no fighting abilities. They must run, hide or die. Their only weapon is a camcorder they must use to capture the horrible events unfolding as they progress through the game. The camcorder also has a night vision mode to navigate through dark environments. In Outlast 2 you are Blake Langermann, a cameraman working with your wife, Lynn. The two of you are investigative journalists willing to take risks and dig deep to uncover the stories no one else will dare touch. Youre following a trail of clues that started with the seemingly impossible murder of a pregnant woman known only as Jane Doe. The investigation has led you miles into the Arizona desert, to a darkness so deep that no one could shed light upon it, and a corruption so profound that going mad may be the only sane thing to do.

Where can I buy a Outlast Trinity Key?

With GameGator, you are able to compare 9 deals across verified and trusted stores to find the cheapest Outlast Trinity Key for a fair price. All stores currently listed have to undergo very specific testing to ensure that customer support, game deliveries, and the game keys themselves are of the highest quality. To sweeten the deal, we offer you specific discount codes, which you will not be able to find anywhere else. This allows us to beat all competitor prices and provide you with the cheapest, most trustworthy deals. If the current cheapest price of $5.67 for Outlast Trinity is too high, create a price alert and we will alert you through email, SMS, or discord the moment the Outlast Trinity price matches your budget.

Can I play Outlast Trinity immediately after the purchase?

What store should I choose for the best Outlast Trinity Deal?