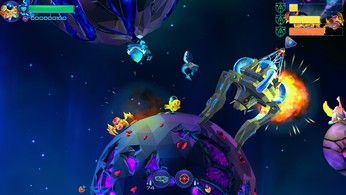 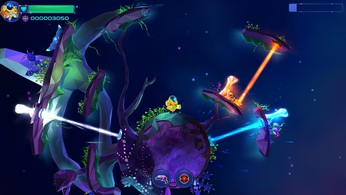 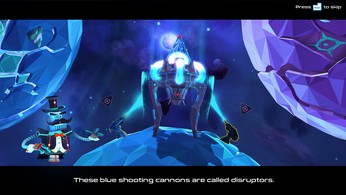 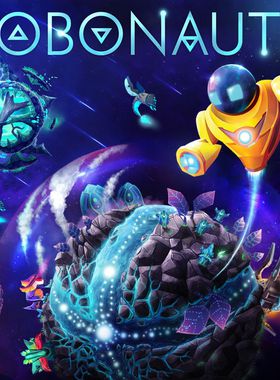 Jump between planets, fight weird creatures, and save the galaxy alone or with a friend! The beloved game that was originally released only for the Nintendo Switch console is coming to PC gamers now! Learn the story of Robo and help him save the galaxy, alone or together with family and friends.

In a nutshell, Robonauts is that arcade game which includes 12 levels. Each level will challenge you. You will explore a universe which consists nearly 50 planets, facing Bosses and creatures and meeting powerful opponents bent on universal destruction.

Robo is a little robot whose curiosity got the better of him and led to his sudden exit from the confines of his safe environment. Now little Robo is far from home, fighting for his life against a constant barrage of enemies.

When developing Robonauts, we chose to give Robo human traits based on our own emotional experience. Robo acts like you and I, and we sense his emotions when has to choose between sides in a battle, trying to figure out who the good guys are. Once you get to know him, it's hard not to love Robo.

While the game is very dynamic, you get to choose your tempo of gameplay. A lot of troubles await you on every planet. We have tried to fill Robo's universe with enough graphically various worlds that everyone who plays can find a unique favorite to which they can return. The graphics in this game are truly spellbinding. And the color scheme makes the game enjoyable for both kids and the kid inside every adult who remembers what it was like to spend a day in the arcade.

Where can I buy a Robonauts Key?

With GameGator, you are able to compare 2 deals across 2 verified and trusted stores to find the cheapest Robonauts Key for a fair price. All stores currently listed have to undergo very specific testing to ensure that customer support, game deliveries, and the game keys themselves are of the highest quality. To sweeten the deal, we offer you specific discount codes, which you will not be able to find anywhere else. This allows us to beat all competitor prices and provide you with the cheapest, most trustworthy deals. If the current cheapest price of $2.51 for Robonauts is too high, create a price alert and we will alert you through email, SMS, or discord the moment the Robonauts price matches your budget.

Can I play Robonauts immediately after the purchase?

What store should I choose for the best Robonauts Deal?