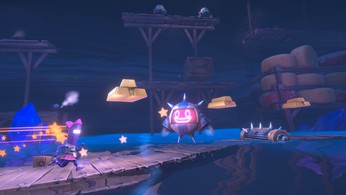 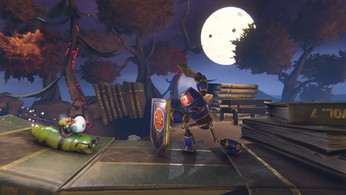 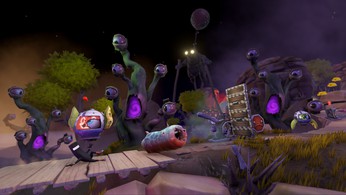 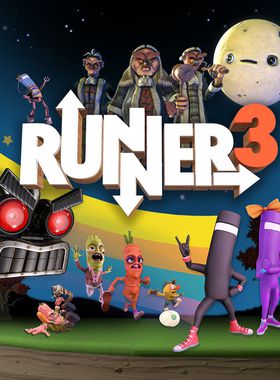 The rhythm-music gameplay of BIT.TRIP RUNNER and Runner2 is back and better than ever!

The Timbletot is determined to rid the multiverse of all its love and happiness. CommanderVideo, a lover if ever there were one, refuses to let this happen. He's ready to jump, double-jump, wall-jump, slide-jump, slide, kick, float, drive, fly, and dance his way to victory, all across a medley of thrilling, challenging, and joyous levels!

- Hero quests! Runner3 is filled with oddball characters in need of your help. Lend them a hand and theyll reward you generously!
- Vehicles! Players will encounter wild vehicles that stand no chance of ever being deemed street legal. Eggplant planes! Celery cars! Cans propelled by carbonation! And so much more!
- Branching paths! Every level in Runner3 offers branching paths of varying difficulties. Take the hard path and earn yourself some gems; opt for the normal path and line your pockets with precious gold bars. The choice is yours!
- Retro challenges! A series tradition, every level in Runner3 has an accompanying "retro" level-it's like two games for the price of one! These levels will also offer a series first: free movement! Control CommanderVideo in ways you never have before, and earn precious “Gildan” coins in the process!
- Item shop! Players will be able to spend their hard-earned Gildans and gems on costumes, capes, accessories, and more. There are no in-game purchases in Runner3-keep your dang money!
- New playable characters! The Commanders are joined by friends new and old, including Dave of Woah Dave! fame, Unkle Dill, Frank N Stein, Awnty Rewty, and more!
- Charles Martinet! Charles Martinet returns for his role of "The Narrator"

Where can I buy a Runner3 Key?

With GameGator, you are able to compare 5 deals across verified and trusted stores to find the cheapest Runner3 Key for a fair price. All stores currently listed have to undergo very specific testing to ensure that customer support, game deliveries, and the game keys themselves are of the highest quality. To sweeten the deal, we offer you specific discount codes, which you will not be able to find anywhere else. This allows us to beat all competitor prices and provide you with the cheapest, most trustworthy deals. If the current cheapest price of $9.41 for Runner3 is too high, create a price alert and we will alert you through email, SMS, or discord the moment the Runner3 price matches your budget.

Can I play Runner3 immediately after the purchase?

What store should I choose for the best Runner3 Deal?