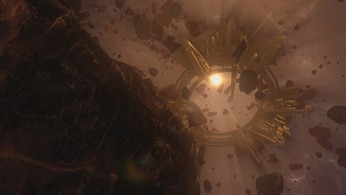 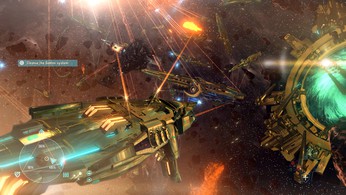 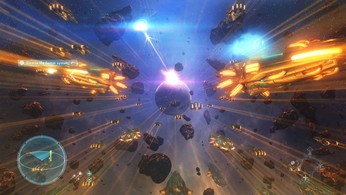 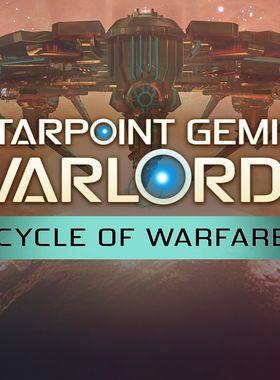 The Cycle of Warfare DLC brings several features that dramatically expand the game with over 100 hours of additional conquest and scenario gameplay. In this new expansion, players will be able to start their conquest over the Gemini system as one of three established factions, each with their own rivals and advantages: Iolian Pact, Korkyra, and Outerlands. In addition, two new challenge scenarios are included. Play as the Ashriari, the unforgiving alien race bent on humanitys extinction, or choose the life of an ambitious privateer and lead your clan to wealth and glory. Both challenges modify the games rules in different ways, moving away from empire management towards riskier gameplay.The Ashriari are convinced that the only way to complete victory is a brutal scorched-earth military strategy. In the Ashriari scenario players will be able to:

Fly and command capital ships of an exclusive new alien ship line, from gunships to carriers;

Vanquish all human life from the Gemini system by shutting down all of the infrastructure;

Fire a massive weapon directly from their mothership, burning planets and vaporizing all means of sustaining life.

These conquest scenarios can be easily modified in-game to allow the players to customize their own starting advantage as they see fit.

- New ship line, a new weapon and new ability (as the Ashriari)

Where can I buy a Starpoint Gemini Warlords: Cycle of Warfare Key?

With GameGator, you are able to compare 11 deals across verified and trusted stores to find the cheapest Starpoint Gemini Warlords: Cycle of Warfare Key for a fair price. All stores currently listed have to undergo very specific testing to ensure that customer support, game deliveries, and the game keys themselves are of the highest quality. To sweeten the deal, we offer you specific discount codes, which you will not be able to find anywhere else. This allows us to beat all competitor prices and provide you with the cheapest, most trustworthy deals. If the current cheapest price of $0.87 for Starpoint Gemini Warlords: Cycle of Warfare is too high, create a price alert and we will alert you through email, SMS, or discord the moment the Starpoint Gemini Warlords: Cycle of Warfare price matches your budget.

Can I play Starpoint Gemini Warlords: Cycle of Warfare immediately after the purchase?

What store should I choose for the best Starpoint Gemini Warlords: Cycle of Warfare Deal?