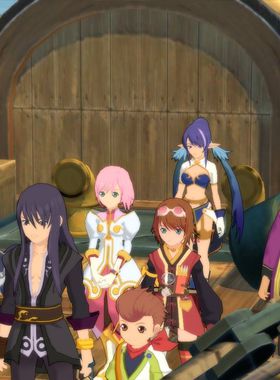 About Tales of Vesperia

A power struggle begins in a civilization dependent on an ancient technology, the blastia, and the Empire that controls it. The fates of two friends traveling separate paths intertwine in an epic adventure that threatens the existence of all. Celebrating its 10th anniversary, Tales of Vesperia is one of the most beloved entries in the Tales of series and returns with beautifully remastered full HD graphics, never before seen characters, expanded story, and much more! The tale of a young hero on a quest for justice that captivated Tales fans returns to Xbox and makes its way for the first time to PlayStation 4, Nintendo Switch, and Steam! Dive into the Definitive version of this game with updated full HD graphics, brand-new music tracks, exciting mini-games, bosses, and a collection of unreleased costume DLC! Yuri sets sail on his adventure with Estelle, a young noble woman; Karol; a boy in pursuit of a guild to call his own; Rita, an eccentric scholar; Raven, a laid-back archer; Judith, a mysterious dragoon; and Repede, a pipe-smoking dog... and now two more playable characters join the fray! Assemble your favorite team and enjoy exciting real-time battles with all new Mystic Artes and skills!

Where can I buy a Tales of Vesperia Key?

With GameGator, you are able to compare 26 deals across verified and trusted stores to find the cheapest Tales of Vesperia Key for a fair price. All stores currently listed have to undergo very specific testing to ensure that customer support, game deliveries, and the game keys themselves are of the highest quality. To sweeten the deal, we offer you specific discount codes, which you will not be able to find anywhere else. This allows us to beat all competitor prices and provide you with the cheapest, most trustworthy deals. If the current cheapest price of $6.55 for Tales of Vesperia is too high, create a price alert and we will alert you through email, SMS, or discord the moment the Tales of Vesperia price matches your budget.

Can I play Tales of Vesperia immediately after the purchase?

What store should I choose for the best Tales of Vesperia Deal?