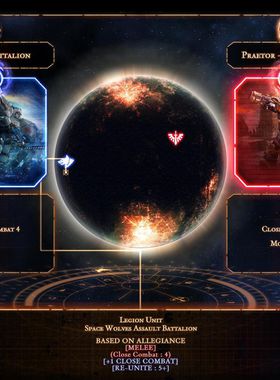 About Talisman: The Horus Heresy

Talisman: The Horus Heresy is a digital board game based on the Talisman rule system and set in the Warhammer 40,000 universe, during the cataclysmic events of the Horus Heresy.

Up to four players will be able to take control of one or more of the galaxy's greatest heroes or most notorious villains. Taking the side of either traitor or loyalist, these Warlords will form vast companies of Space Marines, battalions of tanks and battlefleets of Spacecraft. They are the most powerful beings in the Galaxy and their followers are legion.

The new combative team play will appeal to fans of Talisman and the Horus Heresy alike. It's a unique adaptation of Talisman that has been tailored specifically for digital platforms.

In Talisman: The Horus Heresy the player's experience of Talisman is scaled up exponentially, exploring not a kingdom but a whole galaxy in the 31st Millennium. No longer will you be fighting for the Crown of Command, but for the very future of humanity…

Where can I buy a Talisman: The Horus Heresy Key?

With GameGator, you are able to compare 4 deals across verified and trusted stores to find the cheapest Talisman: The Horus Heresy Key for a fair price. All stores currently listed have to undergo very specific testing to ensure that customer support, game deliveries, and the game keys themselves are of the highest quality. To sweeten the deal, we offer you specific discount codes, which you will not be able to find anywhere else. This allows us to beat all competitor prices and provide you with the cheapest, most trustworthy deals. If the current cheapest price of $488.93 for Talisman: The Horus Heresy is too high, create a price alert and we will alert you through email, SMS, or discord the moment the Talisman: The Horus Heresy price matches your budget.

Can I play Talisman: The Horus Heresy immediately after the purchase?

What store should I choose for the best Talisman: The Horus Heresy Deal?