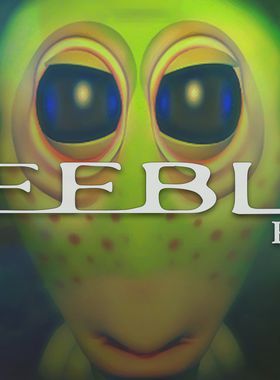 About The Feeble Files

On his way home after another successful day creating crop circles to amuse and entertain the simple people of the backward planet "Earth", our hero Feeble suffers a slight mishap in his spaceship which results in the utter destruction of a rather important Company research laboratory. The one run by his boss, in fact.

If that wasn't bad enough, whilst drowning his sorrows in the local Space Bar, he somehow manages to get himself involved with the shadowy Freedom Fighters, a crack team of rebels who seek to overthrow the tyrannous regime of the OmniBrain, Ruler of Everything.

What follows is an epic space adventure which sees Feeble undertaking acts of betrayal, intrigue, revolution, and even a bit of cross dressing, in an attempt to right his previous wrongs and save the universe from a fate worse than life.

With over eighty locations to visit, 6000 lines of dialogue and more puzzles than a HappyBot can shake your severed arm at, The Feeble Files takes adventuring into another galaxy!

Where can I buy a The Feeble Files Key?

With GameGator, you are able to compare deals across verified and trusted stores to find the cheapest The Feeble Files Key for a fair price. All stores currently listed have to undergo very specific testing to ensure that customer support, game deliveries, and the game keys themselves are of the highest quality. To sweeten the deal, we offer you specific discount codes, which you will not be able to find anywhere else. This allows us to beat all competitor prices and provide you with the cheapest, most trustworthy deals. If the current cheapest price of $5.99 for The Feeble Files is too high, create a price alert and we will alert you through email, SMS, or discord the moment the The Feeble Files price matches your budget.

Can I play The Feeble Files immediately after the purchase?

What store should I choose for the best The Feeble Files Deal?