The Outer Worlds: Murder on Eridanos 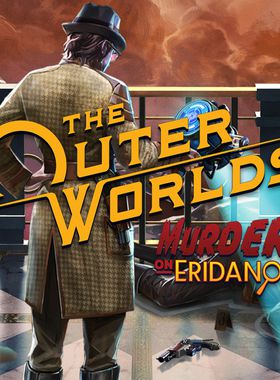 The Outer Worlds: Murder on Eridanos

About The Outer Worlds: Murder on Eridanos

The Outer Worlds: Murder on Eridanos is the second narrative expansion to the critically acclaimed and award-winning sci-fi RPG from Obsidian Entertainment and Private Division.

Venture to the skies of Eridanos and unravel the grandest murder mystery in the Halcyon colony! Everyone is a suspect in this peculiar whodunit after Rizzo's hired spokesperson, the famous Halcyon Helen, winds up dead ahead of the release of the brand-new Spectrum Brown vodka. Alongside your companions, travel across the floating islands of Eridanos and piece together clues using the Discrepancy Amplifier, a new gadget that highlights otherwise unseen hints. There's more to this mystery than meets the eye, and it's up to you (and your crew, if you choose) to solve the case.

Suspicions abound, and it's up to you to get to the bottom of the murder of Halcyon Helen, the most well-known celebrity in the colony. Use the new Discrepancy Amplifier, your key to solving the case, as it highlights temporal inconsistencies not otherwise seen with the naked eye.

Travel among the floating islands of Eridanos, from the luxurious confines of the Grand Colonial Hotel to Rizzo's colorful groves. But be careful about the smiling employees you encounter, as there's something dark lingering under the bright and cheerful surface.

Three new science weapons can be added to the player's arsenal alongside weapon and armor variants to use while solving the case. And increase your level cap by three and employ new perks and flaws to create your most unique character yet.

Where can I buy a The Outer Worlds: Murder on Eridanos Key?

With GameGator, you are able to compare 26 deals across 13 verified and trusted stores to find the cheapest The Outer Worlds: Murder on Eridanos Key for a fair price. All stores currently listed have to undergo very specific testing to ensure that customer support, game deliveries, and the game keys themselves are of the highest quality. To sweeten the deal, we offer you 2 specific discount codes, which you will not be able to find anywhere else. This allows us to beat all competitor prices and provide you with the cheapest, most trustworthy deals. If the current cheapest price of $12.82 for The Outer Worlds: Murder on Eridanos is too high, create a price alert and we will alert you through email, SMS, or discord the moment the The Outer Worlds: Murder on Eridanos price matches your budget.

Can I play The Outer Worlds: Murder on Eridanos immediately after the purchase?

What store should I choose for the best The Outer Worlds: Murder on Eridanos Deal?