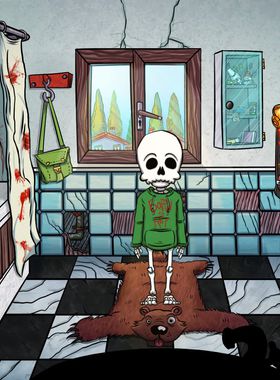 It all happened five years ago, during a picnic arranged by Ronald and his best friend Skinny.

Things were going well, until Ronald pulled out two very tiny plums from his basket, one for Skinny and one for him. Not knowing about his deadly allergy to plums, Skinny didn't think twice about eating it, and immediately went into anaphylactic shock which caused his sudden death. Ronald ran off, terrified.

When he woke up, Skinny discovered that he had become a skeleton and been sentenced to live in Ronald's bedroom wardrobe forever. Since then, Skinny has watched over Ronald constantly, without his knowledge… but now things are going to change! To save his best friend's soul from eternal damnation, Skinny will be forced to reveal himself and make Ronald admit his crime. Not a simple challenge at all!

Where can I buy a The Wardrobe Key?

With GameGator, you are able to compare 2 deals across verified and trusted stores to find the cheapest The Wardrobe Key for a fair price. All stores currently listed have to undergo very specific testing to ensure that customer support, game deliveries, and the game keys themselves are of the highest quality. To sweeten the deal, we offer you specific discount codes, which you will not be able to find anywhere else. This allows us to beat all competitor prices and provide you with the cheapest, most trustworthy deals. If the current cheapest price of $14.99 for The Wardrobe is too high, create a price alert and we will alert you through email, SMS, or discord the moment the The Wardrobe price matches your budget.

Can I play The Wardrobe immediately after the purchase?

What store should I choose for the best The Wardrobe Deal?