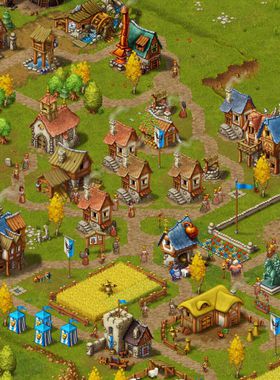 Develop your tiny village to a grand medieval empire with a thriving economy and happy villagers! Find spots for mining ore, harvest the crops of your farms and collect coins as taxes from your folk. Build jousting fields, taverns, marketplaces and beautify your city with impressive statues, magnificent monuments and lush gardens. But there are also dangers lurking close by. Bandits are in the area, looking to plunder and pillage your peaceful town. Build barracks, guard towers and recruit brave soldiers to protect your citizens from harm. You rule the whole empire from your castle and make sure your inhabitants have fun and stay happy!

Where can I buy a Townsmen Key?

With GameGator, you are able to compare 3 deals across verified and trusted stores to find the cheapest Townsmen Key for a fair price. All stores currently listed have to undergo very specific testing to ensure that customer support, game deliveries, and the game keys themselves are of the highest quality. To sweeten the deal, we offer you specific discount codes, which you will not be able to find anywhere else. This allows us to beat all competitor prices and provide you with the cheapest, most trustworthy deals. If the current cheapest price of $7.54 for Townsmen is too high, create a price alert and we will alert you through email, SMS, or discord the moment the Townsmen price matches your budget.

Can I play Townsmen immediately after the purchase?

What store should I choose for the best Townsmen Deal?