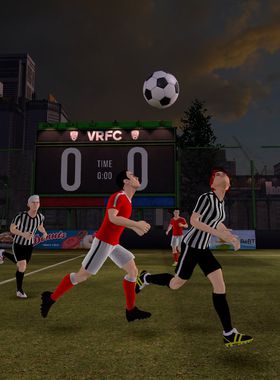 VRFC, where a group of strangers become a team almost instantly.

VRFC takes 8 football ready enthusiasts running, kicking and sliding into the world's first FPF (First person football game). Take to the turf in VRFC, the worlds only first-person VR football game. Whether you struggle to hit a cows backside with a banjo, or your idea of dribbling is something babies do, none of that matters - now you can become a footballing legend in your own living room.

Learn the basics of the game - running, dribbling, shooting, not falling over - then head out onto the pitch to show your new team mates your skills. But its not all about how dazzling youll become - play as a team and youll soon be winning matches as well as admiring glances. They might even forgive you for missing that sitter from 2 yards out.

Where can I buy a Virtual Reality Football Club Key?

With GameGator, you are able to compare deals across verified and trusted stores to find the cheapest Virtual Reality Football Club Key for a fair price. All stores currently listed have to undergo very specific testing to ensure that customer support, game deliveries, and the game keys themselves are of the highest quality. To sweeten the deal, we offer you specific discount codes, which you will not be able to find anywhere else. This allows us to beat all competitor prices and provide you with the cheapest, most trustworthy deals. If the current cheapest price of $10.15 for Virtual Reality Football Club is too high, create a price alert and we will alert you through email, SMS, or discord the moment the Virtual Reality Football Club price matches your budget.

Can I play Virtual Reality Football Club immediately after the purchase?

What store should I choose for the best Virtual Reality Football Club Deal?