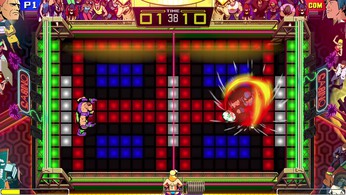 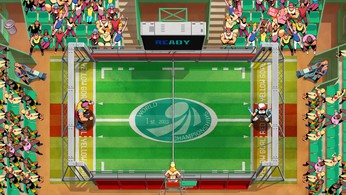 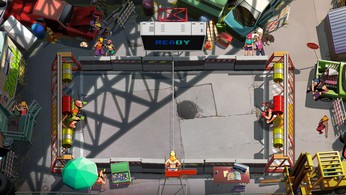 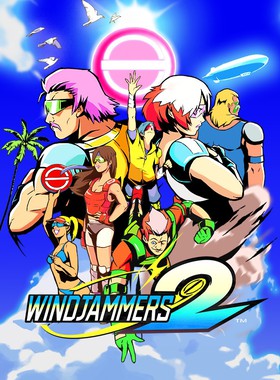 25 years later, throwing flying discs at your opponents is still as cool as back in the days. Sequel to the NEOGEO cult classic Windjammers, Windjammers 2 is the perfect mix between what you loved about the classic title and brand-new mechanics. Fast-paced, strategic, easy to learn but hard to master: Windjammers 2 follows the steps of the first episode and brings back what makes the Windjammers series an amazing fun and competitive game!

New challengers, new stages, brand-new mechanics and awesome new power moves will make your head spin and enhance your windjammin' experience. Master the slapshot, dropshot, the jump, the smash and the powerful EX MOVE, and enjoy the kickass soundtrack coming straight out of the '90s. It's time to meet the French fashionable fast and furious Sophie De Lys and her super moves. One simple advice: choose the right way to go. Max HurricaneWith his impressive silhouette, the Canadian champion isn't here to joke around. He's ready to blow anything out of his way with only one throw. Klaus Wessel, you've been warned. Jao RaposaAbsolute fan of Steve Miller, Jao spent his childhood in Brazil watching the original Windjammers' own his opponents on the jammin' court, and it's now his time to shine. His best weapons? His speed and head-spinning throws. Sammy HoSammy is a very well balanced athlete. The Chinese player is powerful but fast enough to catch every frisbee that comes to him. Beware of his tricky shots! He'll take the title away from you if you're not careful enough!

Hiromi Mita10 years later, you would have thought Japan gave up on the jam? Hiromi Mita is still around with her fast and tricky curve shots shots that will make you regret facing her. Klaus WesselAfter a decade of hard training, Klaus Wessel, also known as the Colossus from Germany due to his powerful shots, is back and ready to show Max Hurricane who's the strongest jammer alive. Loris BiaggiSwift, strong, versatile… the Italian Loris Biaggi is still the great champion he was back in the days. Steve MillerHe's agile and a natural at pulling off reversals along with tricky curved shots. He's back to prove that he is still in the game. Gary ScottThe extremely muscular American competitor is once again here to show to his opponents how powerful he is. Get ready to see one of the most impressive shots of the game! Jordi CostaThe all-round athlete Jordi comes back in the game after 10 years of training. His clinical shots and his speed are the assets that can lead him to win the championship!

Where can I buy a Windjammers 2 Key?

With GameGator, you are able to compare 9 deals across verified and trusted stores to find the cheapest Windjammers 2 Key for a fair price. All stores currently listed have to undergo very specific testing to ensure that customer support, game deliveries, and the game keys themselves are of the highest quality. To sweeten the deal, we offer you specific discount codes, which you will not be able to find anywhere else. This allows us to beat all competitor prices and provide you with the cheapest, most trustworthy deals. If the current cheapest price of $18.12 for Windjammers 2 is too high, create a price alert and we will alert you through email, SMS, or discord the moment the Windjammers 2 price matches your budget.

Can I play Windjammers 2 immediately after the purchase?

What store should I choose for the best Windjammers 2 Deal?