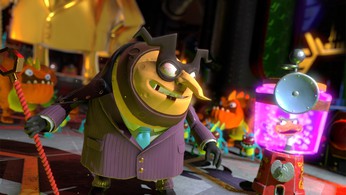 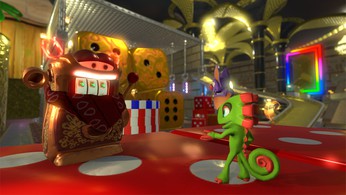 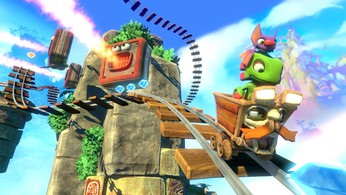 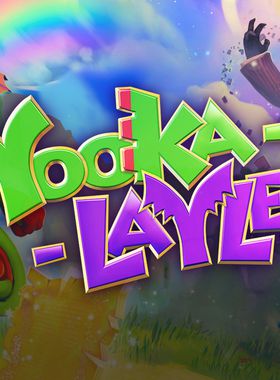 Yooka-Laylee is an all-new open-world platformer from key creative talent behind the Banjo-Kazooie and Donkey Kong Country games. Newly-formed as Playtonic Games, the team is building a spiritual successor to its most cherished work from the past!

Playtonic's new heroes, Yooka (the green one) and Laylee (the wisecracking bat with big nose) were conceptualised for stellar platforming gameplay, created by the same character artist behind the rebooted Donkey Kong family and legendary N64 heroes Banjo and Kazooie.

Across more than five vast and beautiful game worlds, Yooka and Laylee will use their arsenal of special moves to tackle a huge variety of puzzles and platforming challenges in search of Pagies, the golden bounty used to unlock – and expand – new playgrounds, each jammed to the gills with oddball characters and hulking bosses. The magical Pagies will assist the buddy-duo in their ultimate mission to thwart corporate creep Capital B and his devious scheme to absorb all of the world's books… and convert them into pure profit.

Yooka-Laylee was funded on Kickstarter in June 2015, raising an incredible £2.1 million from more than 80,000 backers. Yooka-Laylee remains the most funded UK games Kickstarter ever.

Where can I buy a Yooka Laylee Key?

With GameGator, you are able to compare 39 deals across verified and trusted stores to find the cheapest Yooka Laylee Key for a fair price. All stores currently listed have to undergo very specific testing to ensure that customer support, game deliveries, and the game keys themselves are of the highest quality. To sweeten the deal, we offer you specific discount codes, which you will not be able to find anywhere else. This allows us to beat all competitor prices and provide you with the cheapest, most trustworthy deals. If the current cheapest price of $1.32 for Yooka Laylee is too high, create a price alert and we will alert you through email, SMS, or discord the moment the Yooka Laylee price matches your budget.

Can I play Yooka Laylee immediately after the purchase?

What store should I choose for the best Yooka Laylee Deal?