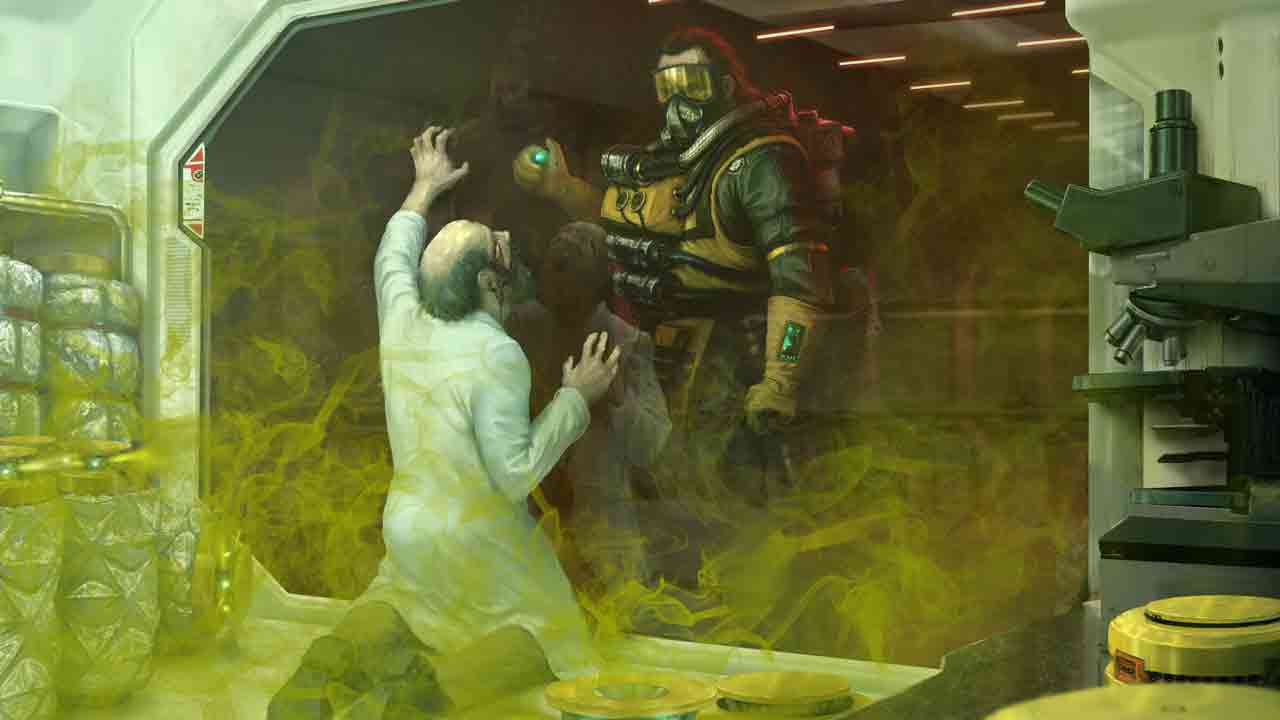 In a distant future, bandits, adventurers and outlaws fight till death in an industrially developed valley on the edge of the galaxy in a game called Apex Legends, which became the most watched game on Twitch in 24 hours - after a week it was played by over 25 million people.

What is Apex Legends about?

At its core, Apex Legends is a classic battle royale shooter: Up to 60 players in teams of three simultaneously land on the map called Kings Canyon - a densely built valley with many walkable houses, bunkers and towers. Once on the ground, unarmed players must search their surroundings for equipment and ammunition, while attempting to be the last team standing at the end of the game. To prevent players from hiding and waiting until they are automatically the last ones left, the game area shrinks every few minutes. The longer a round lasts, the smaller the area gets on which the survivors can move and hide.

This now classic game formula gets refreshed with ideas that are unique to the genre: Before the round starts, players can choose one of eight heroes, each with two special abilities facilitating certain ways of playing.

Bangalore, for example, is the classic soldier who can hide her position with smoke grenades and request an artillery strike in an emergency. The heroine Lifeline, on the other hand, can summon a drone to heal her fellow players - or directly order the delivery of high-quality weapons and equipment via an airdrop. In this way, all players can find the right hero for their preferred playing style.

Before a new round starts in Apex Legends, players can have a look at all eight heroes and their special abilities in the overview screen. Once a game has been found, you'll end up in the hero selection. All three players of a team can choose their heroes one after the other. If your favourite character has already been chosen by one of the other players, you have to choose another warrior.

Before the actual round starts, all players are introduced to the Champion Squad, the team including the player who played best in the last round. Whoever kills the champion in the new round gets bonus points.

The round starts, and your team of three is approaching the playing area. The so-called Jumpmaster of your team can decide exactly when to drop, but individual team members can also release themselves and land independently. Immediately after landing, it is advisable to pick up equipment scattered around the area as quickly as possible: It's almost always worth looking into boxes, houses and supposedly empty rooms.

If the landing point is searched for equipment, the location should be changed as soon as possible to look for more weapons, shields and health packs. In many places in the game world, ziplines make it easier to cross long distances, but they also make players temporarily visible targets.

A regular glance at the map is a valuable orientation, as the playing area shrinks gradually. You should also keep an eye on your inventory: Different types of ammunition are highlighted in colour and make it easy to see which cartridges fit into which weapon.

The longer a round lasts, the more fierce the firefights between the increasingly better-equipped combatants become. Those who keep an eye on the terrain in addition to their own weapons and try to exploit height advantages have a good chance of winning.

After a round, all players receive experience points. Each time you level up, Apex Legends gives you a surprise box containing three random cosmetic items.

Respawn Beacon: If a player is shot down, the still living team members have the possibility to bring the fallen comrade back into the game: Each eliminated player leaves a so-called respawn banner, which can be collected by the other players of the team and handed in at one of 28 respawn beacons, certain locations on the map. If this is successful, the fallen player returns to the game.

Jumpmaster: At the beginning of the game, one of the maximum three players of a team always assumes the role of Jumpmaster. The Jumpmaster decides when and where his team enters the playing area.

Ping: Players can use the middle mouse button to draw their teammates' attention to interesting places in the game world or opponents. These pings are a valuable tool for communicating quickly and efficiently within the team.

Shortly after the release of the game, professional players and streamers competed in a huge battle as part of the Twitch Rivals tournament. Around 450,000 people watched the official tournament stream, and well over two million viewers watched their favourite streamers and athletes. However, the publisher Electronic Arts has not yet announced an official e-sports league for Apex Legends, but this step will undoubtedly follow in the future. The first e-sports teams are already hiring professional players for their squads in order to be as well prepared as possible for upcoming tournaments.

Apex Legends is available for PC, Xbox One and PlayStation 4 and can be played free of charge on all platforms. The game allows the purchase of cosmetic items and new heroes either through the in-game currency or with real money. The developer emphasizes that it is not possible to buy game benefits with the help of real money: Players can thereby only adapt the appearance of their heroes.