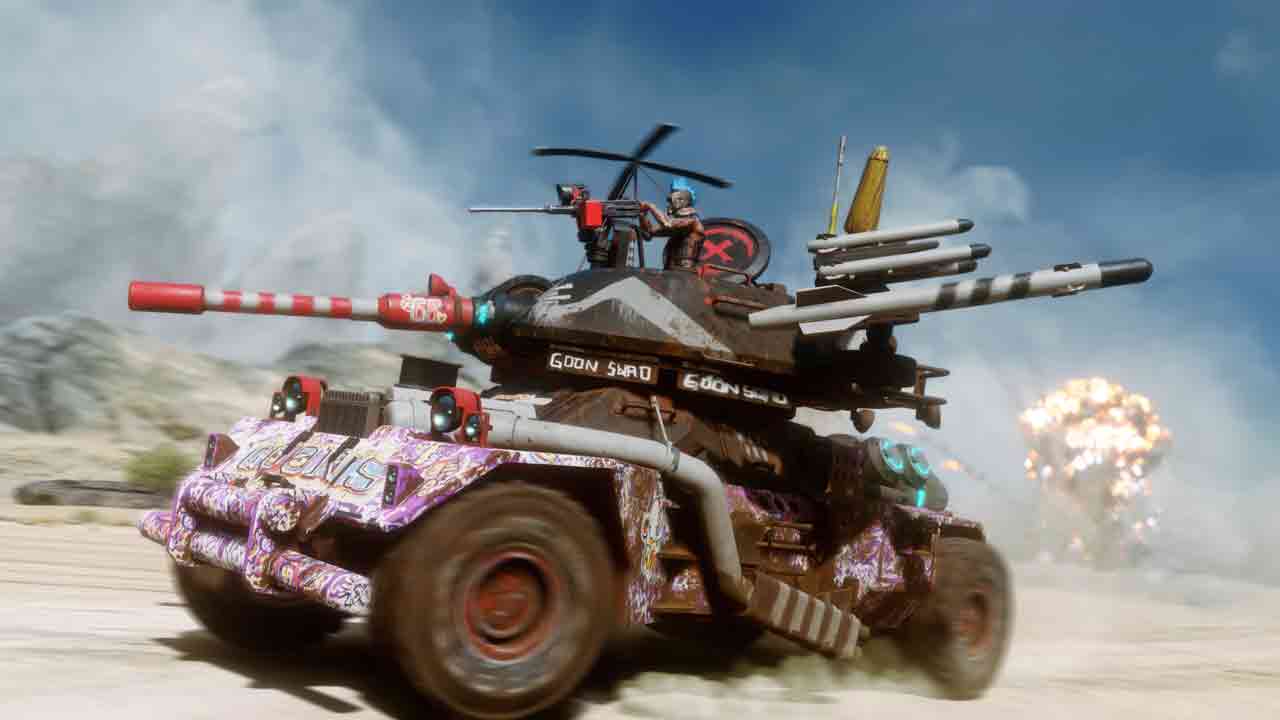 Shoot fast, keep moving, just don't get hit and drive your car through a post-apocalyptic landscape to find the next place where you can shoot even faster - The original Rage was released in 2011 and was meant to be something like a new beginning for id Software. With Wolfenstein, Doom and Quake, the Texan development studio is something like the ancestor of the first person shooter genre. In Rage, set 106 years after the asteroid 99942 Apophis hit Earth in 2029, players slipped into the role of U.S. Marine Nicholas Raine and fought in a post-apocalyptic wasteland for, not only law and order, but also the reactivation of so-called arks. These refer to bunkers buried underground, equipped with high technology to ensure the survival of mankind after the catastrophe.

Rage was supposed to combine one of the original forms of video games - shooting - with another original form: driving or, better said, racing. This, however, did not quite work, not least because the two elements didn't complement each other, but stood strangely side by side. For Rage 2, id Software, therefore, brought in another studio: Avalanche from Sweden, who already created huge open worlds with the Just Cause series and explored the post-apocalypse with Mad Max. Rage 2 plays 30 years after the events of its predecessor, the successful reactivation of the arks has worked miracles and enabled mankind to replant once barren areas and even lay out large areas of jungle and marshland. On the contrary, gangs and military groups are still terrorizing the slowly blossoming wasteland and trying to expand their power.

This applies in particular to the Authorities. Their cybernetically modified leader General Martin Cross abhors any form of chaos and starts a war right at the start of the game to finally put his vision of an ordered world into practice. But Cross has done the math without the protagonist Walker. The new hero - either male or female - has to watch how his esteemed aunt Prowley and many comrades are brutally slaughtered in the prologue. Since then he has only one thing in mind: revenge on the Authorities! In this case, served ice-cold with the help of large-calibre weapons and a state-of-the-art combat suit.

While even the first Rage was synonymous with fast-paced shooter action, part 2 adds another good scoop in this respect. The main reason for this are eleven impressive special abilities, which are unlocked during the course of the game, whenever Walker injects so-called nanotrites into his body. Nanotrites are tiny mini probes acting in the body, making sure that Walker effortlessly performs a double jump, sees opponents through walls, dodges at lightning speed, emits pressure waves, deploys an energy barrier or revives himself shortly before death by means of defibrillation.

Our favourite ability, however, is Overdrive. This special ability is available to you when you send a certain number of enemies to Nirvana and as a result, Walker switches to a kind of turbo mode that both intensifies all attacks and regenerates life energy. As you plough through enemy lines like a berserk, music shifts up a gear and the image is flooded with an even more intense palette of colours.

Rage 2 is very close to both Doom and Mad Max. However, it looks much better, changes from exterior views to the ego-perspective are beautiful and the feeling of fights is especially noticeable. Fast reactions are required, constant movement is a must, as with id Software's signature style. This becomes clear, among other things, when dealing with the nine weapons. Whether it's the Ranger assault rifle, the shotgun, the smart rocket launcher, the gravity-arrow launcher, the railgun-inspired hypercannon, the firestorm revolver, the glowing hot energy firing impulse cannon, the Boomerang-like wingstick or the amazingly unerring Sidewinder pistol - the handling of all equipment is simply great and immediately goes over into flesh and blood.

In addition, almost all weapons score points with alternative fire modes. With the Smart Rocket Launcher, for example, you can capture several enemies at the same time thanks to the switch-on function and then send them explosive greetings immediately. With the shotgun, on the other hand, you fire only one projectile in the alternative fire mode, making enemies fly for several meters. In addition, you can gradually unlock five upgrade levels for each weapon in exchange for valuable Feltrit material. Depending on the upgrade level, various weapon mods can be installed, which usually have a direct effect on parameters such as reload speed, magazine capacity, firepower and handling.

As your playing time progresses, you will feel more and more powerful in Rage 2, one of the reasons being the skill tree with 64 entries. In order to unlock new talents, you must consistently complete tasks for the three most important quest givers in the game. For example, Loosum Hagar, Mayor of the trading town of Wellsprings, is eager for someone to neutralize the storms of authority and the bandit convoys marauding on the streets.

John Marshall, another veteran from the Rage universe, is completely different. He has an incredible grudge against the numerous bandits and giant mutants in the wasteland. Getting rid of them will unlock useful upgrades to the Kill & Destroy skill tree. In battle, for example, you'll be more likely to hit critical hits, change weapons more snappily, or catapult grenades back to the original launcher with a well-timed melee attack.

While the first Rage offered a rather modest choice of means of transport, Rage 2 now increases this number to 16, with a lot of exotic rides to choose from. How about a wheel loader? The construction vehicle weighing tons is not particularly fast, but its lowered shovel rolls through enemy ground troops like a combine harvester through a cornfield. The Xerxes 3 tank is also quite sluggish. What it lacks in speed and manoeuvrability, however, it compensates with superb firepower and centimetre-thick armour.

If you want to admire the beautiful game world from the air, you can do so aboard a gyrocopter. But also, a monster truck, various buggies and different motorcycles are not missing this time around. The Phoenix should also be mentioned: Walker's standard vehicle has a talking on-board computer and - unlike all other vehicles - can be tuned many times in the game. A pressure-wave disrupter, for example, keeps the infantry away, while the ejection seat function spectacularly transports your alter ego into the air.

The greatest weakness of the previous game was the rather flat story. The makers were apparently quite aware of this and set many levers in motion to make it better this time. As a result, we get more elaborately staged cutscenes, much more hustle and bustle in the cities and an extra portion of humour. In Wellsprings, for example, you meet a shady businessman who has some strange similarities with the current US president. In Mutant Bash TV, a kind of gauntlet run for glorious mutant killers, a crazy dominatrix is in charge. And also the encounters with Dr. Kvasir will always put a grin to your face at some point.

The noticeably optimized storytelling is flanked by a pleasantly varied game world, which for the first time takes you to jungle and swamp sections with much more value on vertical level design than in the first part. The enemy AI also has some tricks in store! For example, many fighters throw grenades back to the player or advance together to encircle Walker. As a whole, the AI acts a bit too predictable and sometimes a bit too daredevil. The latter is especially true, if you attack a bandit camp with a vehicle and many basic defenders can't think of anything better to do than running blindly into the hail of bullets of the car.

The official hardware requirements of Rage 2 are moderate, a fast quad-core processor is, however, assumed. The hardware recommendations are loosely sufficient for 60 fps at 1,920x1,080 pixels including ultra details, even WQHD can be tackled with minimal cutbacks.

The in-game graphics menu offers good optimization potential for this, with the optional, dynamic resolution scaling being a very interesting adjustment if you only need to save a little performance in some situations. You can limit the maximum degree of upscaling and use the frame rate target to define the threshold above which upscaling is activated. As a result, the image is only calculated at a lower resolution if the performance is not sufficient to achieve this goal.

In addition to the optics, the field of view can be adjusted, with soft Vsync using an adaptive image synchronization, which deactivates synchronization at low frame rates to ensure the lowest possible input latency. Furthermore, the standard very strong chroma deviation or the HUD can be deactivated, 21:9 resolutions are supported and the input can be adjusted extensively to your own wishes.

The technical development stage of the Apex-Engine is on a similar level to the chic Generation Zero, with a wide distance of view, high object density, many physical elements as well as very attractive shading of the partly luxuriant vegetation. The interaction between lighting and the physics-based render model is largely convincing, with swamps, metallic surfaces and dusty streets all appearing credible, even if the game is not aimed directly at an ultra-realistic look.

The developers use of tessellation for landscape representation, screenspace reflections for water surfaces, huge explosions and the almost ubiquitous physics models testify to the relationship with Just Cause. The graphics of Rage 2 are quite respectable and also technically convincing. Interior areas are nicely illuminated - only here and there you are able to notice flickering shadows or culling (fading out of geometry at the edge of the screen).

The performance is almost exclusively positive, which is also pleasing because the last two titles by Avalanche Studios and the Apex engine, Generation Zero and Just Cause 4, left a somewhat edgy impression. Obviously, the studio's resources were put into Rage 2 to a large extent, the game seems to be much more elaborately produced and technically much cleaner than both titles. The game needs potent mid-range hardware to display Full HD with ultra-details smoothly but isn't remarkably demanding compared to other current titles.

Once again Rage 2 shows that in Open World games the story is actually created by the map. The more one is on the way, the more places reveal themselves. Question marks turn into bandit hiding places, small towns or abandoned gas stations where you can find resources and hidden enemies. More and more, you drift through the area, explore everything, conquer the next hiding place, disable another Tower of Authority, find another balloon and shoot it down, gain more weapons, more additional abilities.

You can fight against gladiators in arena battles, hit enemies until they burst into a pink fountain, or blow them up with grenades. When Walker switches to Smart Rocket Launcher in Overdrive mode, shoots off half a dozen enemies in one shot and then kills the rest of the pack with a combination of double jump and power slam, it just feels incredibly satisfying. In addition to the successful gunplay and motivating upgrade mechanisms, the creators also score points for their wonderfully wacky humour and a linear, but thoroughly entertaining story. The enemy AI, driving behaviour and the variety of side missions don't want to convince us completely just yet, nevertheless: If you like post-apocalyptic games like Mad Max, Doom or Borderlands 2, you will definitely have a blast. 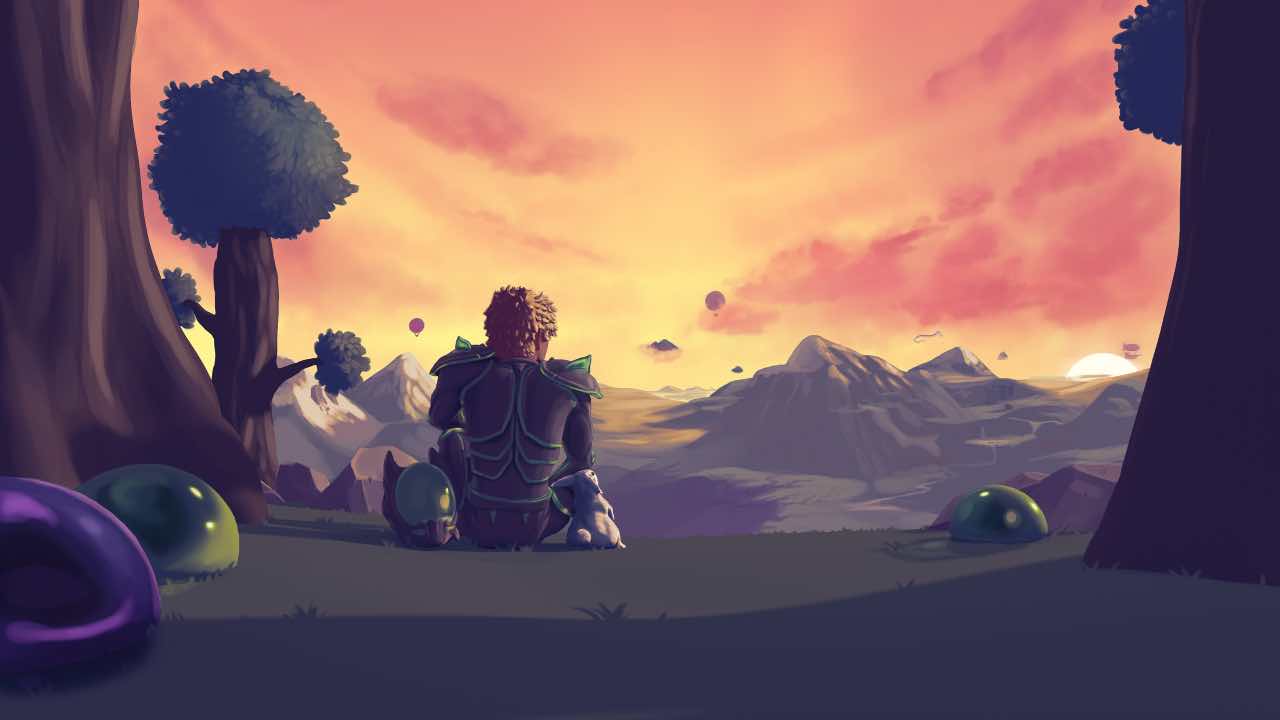